The Way of Devotion: Prajñāpāramitā

Prajñāpāramitā, is known as the “Mother of all the Buddhas”. She is always portrayed as female whereas Compassion, by contrast, is generally represented in Indian cosmology as male.
Her name is made up of two words; prajñā,  meaning wisdom and referring to the consciousness that can see clearly the true nature of reality,  the seeing of the Awakened One or Buddha. The second word is paramita, often translated as ‘perfection’ with the sense of something being ‘beyond’ the ordinary and mundane. The word itself has the connotation of ‘crossing over’, referring to the Buddha’s parable of the raft, in which a man who is trapped on the shore of samsara makes a raft and then paddles himself over to the shore of nirvana on it The image of ‘crossing over’ or ‘moving beyond’ appears again in the Heart of Great Wisdom Sutra (short version), which is chanted in Mahayana temples and which belongs to the literature collectively known as the Prajñāpāramitā literature .
“When the Bodhisattva Avaloketiśvara practised the profound Great Wisdom Gone Beyond he clearly saw that the Five Aggregates are all empty and thus passed beyond suffering.” [1]
This crossing over from one shore to the other is the passing beyond ‘I’, no longer being in thrall to the notion of an enduring and separate self, and is what is meant by seeing the Five Aggregates as empty. This emptiness is, of course, sunyata, the great teaching of the Mahayana, expounded by the Indian sage Nagarjuna (c.150 – c.250 CE) and which is the central theme for all the sutras in the Prajñāpāramitā cycle of sutras. 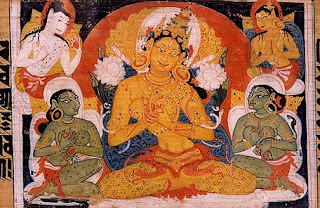 In this understanding of the deity who is personified as the Wisdom-Gone-Beyond, we have the notion that whether or not Buddhas arise and pass away the Buddha-Heart or Buddha-Mind is ever present. The presence of this Heart/Mind matrix forms the ground of being which gives rise to all phenomena. Thus in one deity we have the basis for the interweaving of phenomena and emptiness which is echoed in the opening lines spoken by Avalokiteśvara:
“Oh Sariputra, form (rupa) is not different from emptiness, emptiness is not different from form. Form is emptiness, emptiness is no different from form. The same applies also to feeling or  sensation (vedana), perception (samjna), mental configurations (samskaras) and consciousness (vijñana). ” [1]
These five aggregates are the basis for the arising of all phenomena and are pronounced as being no different from emptiness. Thus, the absolute truth of sunyata and the relative truth of phenomena are not different. The truth is in the everyday world and not outside  it. 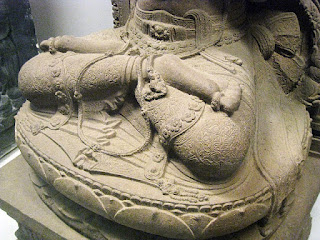 An ancient story tells that the Buddha realised that the teachings of the Prajñāpāramitā were so profound that humanity was not ready for them. So he gave these teachings to the nagas, mythical snake-beings who live under the ocean. When Nagarjuna was born, he was  eventually allowed to enter this realm of the nagas in order to retrieve these teachings and thereafter disseminate them. This reflects another important teaching of Mahayana; that the Buddha  taught only according to  his audience’s capacity to understand, and no more. This allowed the later teachings their own authenticity and place in the Buddhist lineage. 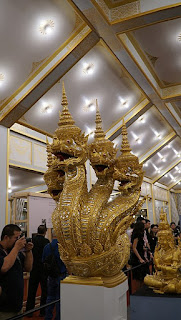 Popular posts from this blog

Exercises in Mindfulness: Constructing a Wheel of Life 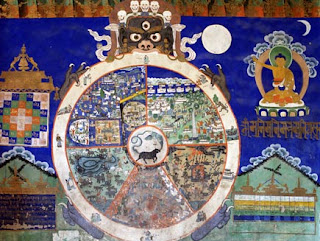 The Buddhist Wheel of Life is perhaps the most ubiquitous image in Buddhism, after that of the Buddha himself. It can usually be found near the entrance  to a temple or monastery and visitors are often instructed in its meaning by the guest monk.
The details of each image of the Wheel vary from place to place, but the common elements remain the same. . There are concentric wheels within the Wheel; the central one has three animals in it, the boar to represent delusion, the snake to represent anger and aversion and the cockerel to represent greed and the desire to accumulate. There is a wheel surrounding this divided into a light half and a dark half. Here beings circulate up and down,  signifying the turning of the wheel, which is in constant motion. Then there is a wheel whose main body is divided, like a pie, into six realms. On the rim are 12 images portraying the workings of karma and re-birth.
This symbol is held by a fearsome being with huge teeth and claws and with  three eyes, …
Read more

The Two Entrances: A sermon by Bodhidharma plus commentary 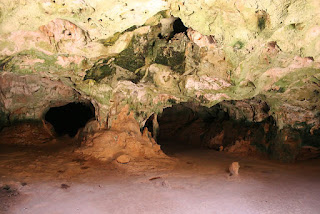 The First Patriarch of Zen, Bodhidharma, lays out the two principles for practice in this sermon originally found in the caves of Dunhuang.
The manuscript of this sermon was found amongst the documents in the Dunhuang caves and was attributed to Bodhidharma.
The manuscript itself was written complied and added to by individuals and groups who looked to Bodhidharma as their guide and inspiration. This ‘adding to’ a text by those who follow in the footsteps of a patriarch was a common enough practice. It was justified by the understanding that having walked the way it was possible to elaborate a teaching in accordance with the spirit of the founder.
"Many roads lead to the Path, but basically there are only two: Principle and Practice.
To enter by Principle means to realise the essence through instruction and to see that all living things share the same true nature, which isn’t apparent because it’s shrouded by sensation and delusion.
Those who turn from delusion back to reality, who me…
Read more